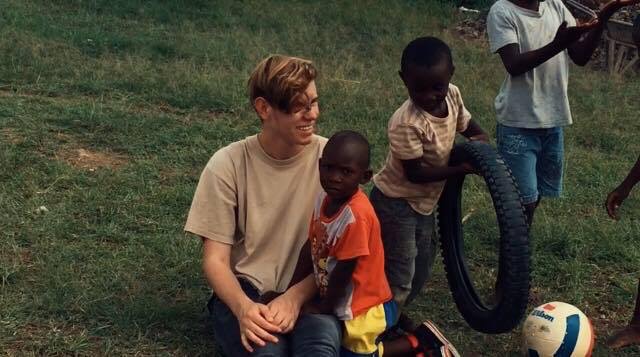 This is a testimony from a ministry we work with. This ministry is an after school program where they have at risk youth learn how to box. There is a kid there who was asking us questions the week before. He asked, “why are you here?” And “is it because you’re smart?” We responded saying how we were there for him. He quickly said, “I’m here to box, I’m not smart.” During that time, teachers in LA were on strike and he asked with a saddened look on his face, “are you guys gonna go on strike?” I looked at him and told him that I am never going on strike, that I’ll be there every Thursday. It was time for us to go and his upset facial expression didn’t change.

The whole situation really broke my heart. After getting back to our campus, I went to pray and intercede that Jesus would break in and encounter this kid and that his presence would be at that ministry. I really felt that The Kid didn’t know who he was. I began to cry more and more as I felt God’s heart for him and feeling how God sees and knows him. Feeling strongly that Jesus is with him.

This leads up to the recent Thursday we were there. We had been there for about 30 minutes when this boy came walking in. He looked at me and asked if I could help him with his homework. I said yes and immediately he went to go grab us two chairs as quick as he could. While there, I asked him what his dream was. He told me that his dream was to get revenge on women who beat 2 kids. He said “one of those kids is me.” He laughed a little bit to mask his feelings and those words just hit me hard. I asked the Holy Spirit to guide me, and my eyes were led to a Martin Luther King worksheet that was in his folder. I felt led to look up the quote, “Darkness cannot drive out darkness; only light can do that. Hate cannot drive out hate; only love can do that.” It seemed to really make sense to that Kid. Then I talked to him about the value of people and seeing who they really are. He then looked at me and his eyes were lit up as if something had changed in him. He said, “we can love people who hate us and they can change, because there's good inside of all of us.” He started to speak things out like this, all about transformation, forgiveness and I felt so much as each word he spoke carried depth.Then as he kept doing his homework, I started to speak life into him saying how special he is, how he sees people and cares for them. I spoke out that he is smart and there is so much purpose to his life. This week he didn’t reject what I said, but nodded and with a grin said “That’s me.”

While sitting with him, I felt God speak clearly “my presence is here, covering him.” I felt the atmosphere shift and the presence of God all around and that little boy began proclaiming words over himself. He said that he’s smart, loves to help people, and just so many things that echoed who he is really is. He then said “maybe I can be like you guys one day and I can help people.” It was so crazy how this kids' dream went from his wanting revenge to him wanted to be like us and him speaking out about transformation. God spoke to me again saying “your prayer broke something off of him.” I was so filled with joy and excitement. Him and I were laughing and he was doing all his homework fast. Before this time, he would always complain about his homework and not wanting to do any of it. This time he was telling the police officer that volunteers there, “I get it! The homework, I get it! Can I please finish it?” Then we had to leave, but he wanted me to stay and said that he wanted to do a word find with me. Before this he never seemed to care much when we were leaving. I asked him one more time, “do you know why we're here.” He said while pointing at himself, “because I’m smart, because of me.” I called out the value I saw in him, who he was so that he could see it to. I sat with him and was present with him so that he could understand that no matter what he says or does, I am gonna be there.

We started going there so we could share the love of Jesus with these kids. The verse Luke 18:16 says, “But Jesus called the children to him and said, "Let the little children come to me, and do not hinder them, for the kingdom of God belongs to such as these.” We go in there knowing that the kingdom belongs to each of the kids we meet. We don’t call them out in what place there in but call out who they really are each with a purpose and a destiny. We look at them long enough until we see the kingdom and Jesus in them and we tell them what we see. We listen to them long enough until we hear who they really are and tell them what we hear. Even though it’s a place where we don’t get to proclaim his name as the program is with the police department, we carry the presence. We bring Jesus through who we are, and we speak who Jesus sees them as. We are seeing it change atmospheres and transform lives. It’s not a formula, it’s being present to what Jesus is giving in a moment. Being still with God and receiving what he’s speaking to each unique kid. God wanted to meet him, and he wants to continue to meet everyone where they’re at. We just have to be present and willing to listen to what he’s doing.

About the Author: Communications